I first saw nintendo at a friend's house. It was playing Super Mario Bros. that I fell in love with (or at least at the time--really, really, liked) Nintendo.

When I got my first Nintendo, they had stopped shipping Super Mario Bros. so instead, I got Super Mario Bros. 3. I was very pleased with it. It was even better than the original Super Mario Bros. I remember seeing the McDonald's toys that came out before I got the game, and I thought that Mario's tail and ears were very curious. I've now since had the Super Nintendo and Nintendo ("Ultra") 64 (no gameboys or virtualboys).

Now, we've even moved up to the Game Cube as well as Game Boy Advance (well, for the sis,
anyway). Super Mario Sunshine is quite pretty. From the water effects to the handling, quite nice. 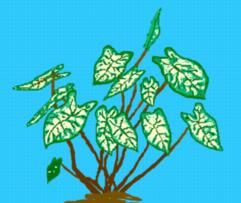 For as long as I can remember, I have had an obssession with plants. I started out with beans from the supermarket--growing them in those egg shaped L'eggs stocking packages after putting a little dirt into it. The cardboard base gave it support and the transparent top (for some) created a little greenhouse.


Animation. This is how people create life. I find it to be quite cool. I've only done a few things (hey! animation takes a lot of work). Wanna see what I got?

Needle crafts have been something that have amazed me, a lot like growing plants. It's the creative and developing process that captivates me. I taught myself to knit, and now I meet with a group to keep me regular.